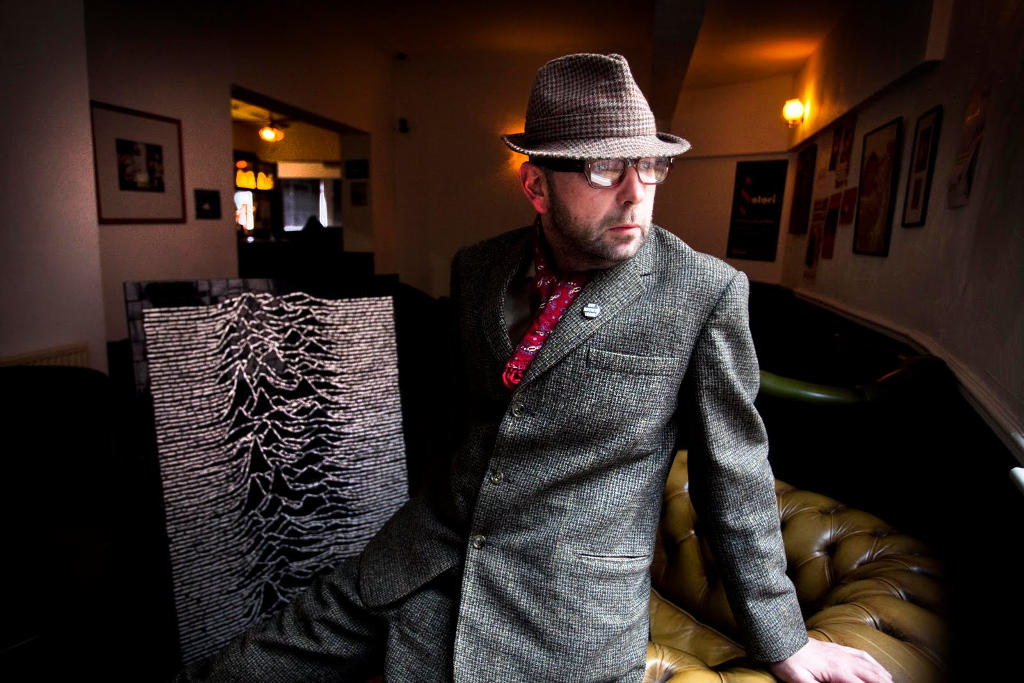 Mark Kennedy, or MK as the dons of Manchester art might put it.

What’s so bloody wonderful about a geezer who glues cracked pottery to a wall?

Most importantly , the unique impact his art makes on every viewer, from the fortunate owner of a Kennedy piece, or maybe that should be a piece of Kennedy, to the casual stroller in the Northern Quarter of Manchester, who smiles at his depictions of Morrissey or 007 (or me, or even Coogan as me).

So I have declared an interest, and more than that, I want to declare that I am about to make by bid for pseud’s corner and indulge in some art-criticism drivel, although it is drivel in which I believe absolutely.

Cause I believe the best way to understand the magic of Mark Kennedy is to think about two of WBYeats’s greatest poems, Byzantium and sailing to Byzantium.

Cause that’s where we’re coming from here.

It was as a young altar boy at St Mary’s Marple Bridge that I first experienced ecumenism in the guise of an invitation our PP sent to a bunch of greek Orthodox priests to celebrate mass. Their way.

And their way was cool. Cool as in hot. It was, quite simply, sensual. Very, very sensual. The overdoing it on the incense and myrrh, the sweet heady smells, the taking of the wine, thick strong red wine, not just a tasteless wafer. All so physical. Just like the heart of Byzantine culture, the physicality of the mosaic. The viscerality of these deeply textured images that I would later see in Istanbul as a late teenager and which would then resonate with the work of a young Manchester artist whose Byzantine constructions would begin to appear around Manchester in the early 90s.

And what is so special is the three dimensionality, the rough protrusion that this art makes from the one dimensional wall on which it hides its depth.

I am lucky enough to have one on the wall of my loft, a birthday present from my partner, turned over at cut price, “cause it’s family”. It’s “Unknown Pleasures” by Peter Saville out of an old maths book belonging to Bernard Summer, but

with the iconic black and white image of the radio emissions erupting from a dying star.. turned Orange. Orange for fuck’s sake.

And it’s wonderful. Startling and wonderful. He also did a series of variations on “U.P.” this time multi-coloured lines on black, which hung on the wall of Exchange Square Selfridge’s. I hope they found as appreciative a home as their orange sibling.

And let’s go beyond the sensual feel of Mark’s mosaics and their exhortation to touch and feel.

There’s the subjects. How easy to be an artist and do your own abstract shite and preen yourself. That you’re an “artist”. Mark copies – photographs mostly – and with that “copying” gives up bragging rights as an artist. Not for young Kennedy big words to explain to the big-wigs “the aesthetics of the icon” even though icon is a name straight out of Byzantium – yes he’s sailing close to the wind on his way to Constantinople.

And that’s what’s going on. MK takes iconic images and finds for them a new life, a new role, a new tangibility in their existence as mosaic. And the iconic image finds new things to say to us.

And if that isn’t art I don’t know what the fuck is.

The Bruce Lee, the Ian Brown, the Beckham that even flattened on the cover of city life on 80mm stock with a gloss overlay, still managed to transmit the new life and meaning given to this classic stock image.

But Mark Kennedy is hardly going to get up there with “artists”.

And a reassembler of our lives.

And can someone get Tommy Cooper’s clock working again.

So it doesn’t work.